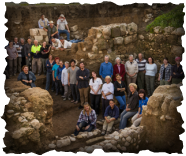 ORGANIZED BY: University of Sydney and Near Eastern Archaeology Foundation.


If you'd like to get more information (only if really interested in the project-NO SPAM PLEASE) email at the Volunteer Co-ordinator:

or fill Registration of Interest form:


THE PROJECT BRIEFLY: (some information about the project itself)

"Pella is a magnificent 10 hectare site, set in beautiful surroundings beside a perennial spring in the eastern foothills of the north Jordan valley. Human occupation in the region around Pella stretches back over half a million years and the site itself has been continuously occupied from around 8000 BC. As a result, the tell at Pella contains over 20 metres of occupation debris spanning the past 10,000 years. Excavations by the University of Sydney over the past twenty-nine years have already unearthed many important discoveries, including: Neolithic housing (ca. 6000 BC); Early Bronze Age stone defensive platforms (ca. 3200 BC); massive Middle Bronze Age mudbrick city walls (ca. 1800 BC); Late Bronze Age residences, some with clay tablets (ca. 1350 BC); large areas of the Hellenistic city (destroyed by war in 83 BC); the theatre, baths and fountain-house of the Roman city (ca. 150 AD); three Byzantine churches (ca. 550 AD); an early Islamic city destroyed by an earthquake (ca. 750 AD); and many other finds that bring Pella’s history up to the present day.

Over the last sixteen years (1997-2013) excavations at Pella in Jordan concentrated on investigating a series of superimposed Bronze and Iron Age temple structures located on a slight rise on the southern side of the main mound. During this time we excavated three distinct Bronze Age (ca. 1700-1200 BCE) and one Iron Age (ca. 900 BCE) stone-walled temples. As the size of the earliest Middle Bronze Age (ca. 1700-1600 BCE) temples were much larger than expected (at 32 x 24 metres, the largest ‘Fortress’ temples ever found), it took us three long seasons (1997-2001) to uncover the massive stone walls and footings. Finds were spectacular, and included several figured, painted and incised ceramic cult stands; many ceramic bowls, jugs and jars (bearing ‘tree of life’ motifs) and a large mixing bowl with ‘bulls-head’ handles.In the last four seasons (2003-2009) we excavated significant parts of three earlier mudbrick temples (ca. 1900-1700 BCE), the uppermost displaying a magnificent white plaster floor. All were located immediately below the floor of the central room of the stone-built temples and our investigations in this area are complete.

Instead our attention now is turned to the west of the temple where a sequence of buildings are slowly being uncovered. In this area, we continue work on a multi-room Iron Age administrative building (2003 and following) located immediately west of the temples. The Iron Age building contained distinct room assemblages in each of the 26 rooms excavated between 2003-2005, all preserved below the thick layers of burnt debris that sealed the Iron II complex, when it was destroyed around 800 BCE. Further excavation of this building's northern reaches will be a focus of the 2015 excavations.

Our work has shown the Late Bronze Age phase contains many distinct building phases in an area where the structures appear monumental with beautiful plaster floors and cobbled courtyards. Intriguingly the area also contains a number of well-constructed stone-lined bins that suggest that this area was not purely secular at this time.

In 2013 we were only able to uncover the top of the massive Middle Bronze Age walls that suggest that this area also contains a major building dating to the period when the stone-built Migdol Temple was first constructed. Again, further understanding these important phases will be a focus of the 2015 season.

We look forward to an interesting and rewarding season as we expand our work exploring one of the more fascinating and important cities of ancient Jordan."

For further information about the project/ To apply you can click onto this link:

(more information about the project)
http://sydney.edu.au/arts/sophi/neaf/excavations/pella.shtml


or, visit us at our facebook group, look for:


For some of our videos: